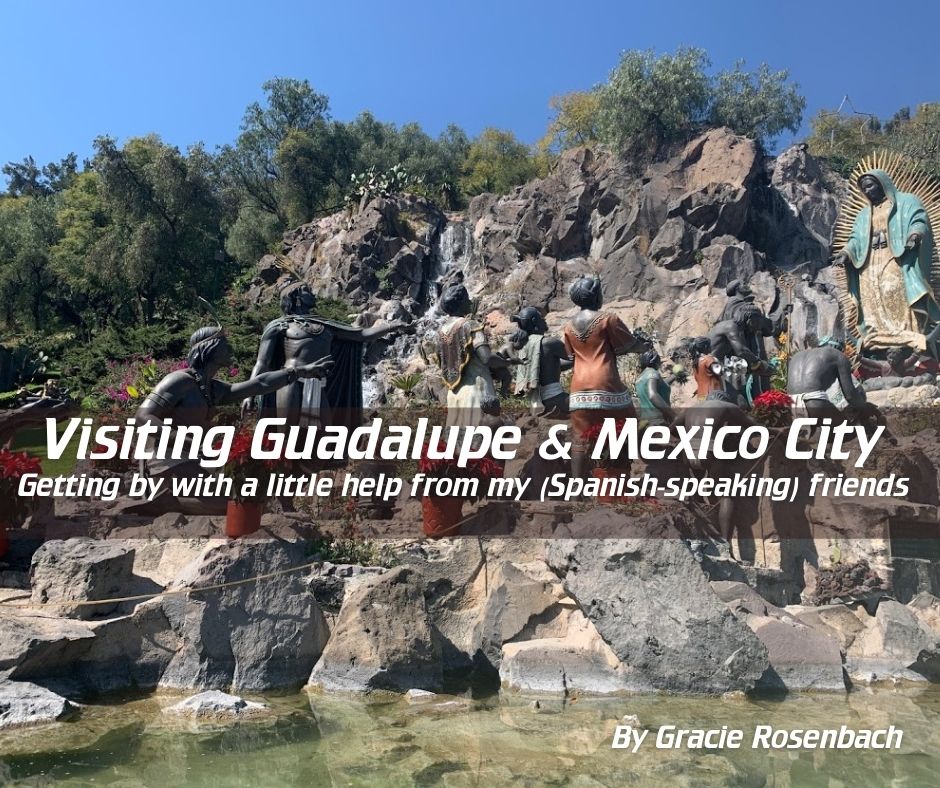 Am I not here, I who am your mother?

On this day 489 years ago, December 12, 1531, Juan Diego heard these words in his native language from Our Lady on Tepeyac Hill in Guadalupe, Mexico (now a part of Mexico City). She healed his uncle and asked for a church to be built in her honor on the site of her apparitions. The archbishop of Mexico City did not believe Juan Diego, and so Our Lady provided him with a sign – the image of Our Lady of Guadalupe on Jean Diego’s tilma (cloak). This tilma is now cherished throughout Mexico and the entire Catholic world, and a large basilica and religious complex has been built on the site to commemorate Our Lady’s apparitions in Guadalupe.

I just happened to be visiting a friend in Mexico City last December. In my head, Guadalupe was like many other Marian apparitions – in a more rural area of the country – and so I might not be able to visit while in the city. I looked it up and told myself that if it was within an hour and a half drive, I would commit to hiring a car for the day to go visit. You can imagine my pleasant surprise when it was only 20 minutes from my friend’s apartment – within the city limits! With this new knowledge, I started to plan my visit.

When I arrived at Guadalupe on December 9, there were huge celebrations – music and dancing – happening in the main square. Again, not being very well versed in this Marian apparition, I didn’t realize how serendipitous (or was it divine intervention?) my timing was – I was visiting only 3 days before the Feast of Our Lady of Guadalupe, and so pilgrims had already started assembling and celebrating in anticipation. The pure joy throughout the complex was so contagious – I could have watched their celebrations all day.

The whole site is incredibly large, and surprisingly didn’t cater well to an English-speaking audience – everything was in Spanish (and unfortunately I had minored in French)! I was very confused at how to best navigate the large complex, and it was difficult to ask for help due to the language barriers. In fact, because I was so overwhelmed, I even went right by the tilma without realizing what it was! I really wish I had gone with a group tour so that I would have had a guide to navigate and explain everything. Not only does Select International’s ‘Our Lady of Guadalupe and Shrines of Mexico’ tour include a day to visit and celebrate Mass at the Shrine, but it also includes so many other holy site visits in the area as well, such as the birthplace of Juan Diego and the Franciscan Missions. 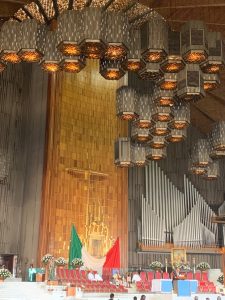 Tilma above the Altar

Despite my poor planning, it was still such a blessing to visit Guadalupe (especially once I found a map and got my bearings)! First I headed up to Cerrito’s temple up on the hill, which was erected at the place where Our Lady appeared to Jean Diego. This humble chapel was filled with decorations and pilgrims celebrating Our Lady, and since it’s on the hill, it provides amazing views of the city. Then I went to the Ancient Basilica, Templo Expiatorio a Cristo Rey, which housed the tilma until the building suffered some structural damage which prompted the construction of the new Basilica. I stumbled upon adoration in a side chapel of the Ancient Basilica, which provided a nice few moments of silence with God amid the amazing celebrations outside.

Finally, now that I had journeyed through the history of the apparition and spent some time in prayer, I was ready to once again tour the new Basilica of Our Lady of Guadalupe and to visit the tilma. The new basilica has a large atrium in which they celebrate Mass, with the tilma hung above the altar. The doors open fully onto the main square to allow for a massive amount of overflow which I expect is necessary on the Feast Day. The best part, I learned, is that this isn’t the only opportunity to see the tilma. I went further inside the basilica around the back of the atrium and found the corridor that houses the tilma with moving walkways to keep the flow of visitors going in both directions. Of course people still hovered around at the end of the walkways to try to visit the tilma and take photos, but it’s a great way to avoid congestion and guarantee a nice visit (and picture) of the tilma. I rode the walkways a few times back and forth, allowing myself plenty of time in prayer and admiration for this beautiful miracle. 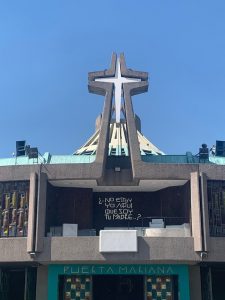 After purchasing many items in the gift shop and having them blessed, I concluded my visit and exited back into the busy Mexico City neighborhood. I reflected on how unique it is to have such a holy site in the middle of the city, and how different the atmosphere was just a few hundred feet away outside the compound. I prayed that although it may be easy to take this beautiful site in the middle of the city for granted, that Our Lady would continue to watch over the country and exert her wisdom, strength, and guidance on them, for her presence there is unmistakable.

In my remaining time in Mexico City, I was lucky to have my friend to show me the amazing sites and take me to delicious restaurants. We visited the Palacio Nacional to see some Diego Rivera paintings, I stopped to pray in the Mexico City Cathedral (one of the largest churches I’ve ever been to – I counted at least 3 large altars), and we went to the pyramids outside of the city. Of course, we also checked out some markets, had coffee overlooking the Aztec ruins, and tried some local delicacies (grasshoppers and ant eggs)!

There’s so much to do in Mexico City and the surrounding areas – religious and cultural – that I would recommend this trip to anyone. I’m glad I had a friend to act as my tour guide in the city, but really which I had had someone to show me around the Guadalupe Shrine! That’s why going with Select International will ensure you don’t miss a single thing about this great city, and that you’ll be able to learn about the full significance of all of the amazing religious sites the city and surrounding areas have to offer.

Our Lady of Guadalupe, pray for us!

The page you requested could not be found. Try refining your search, or use the navigation above to locate the post.