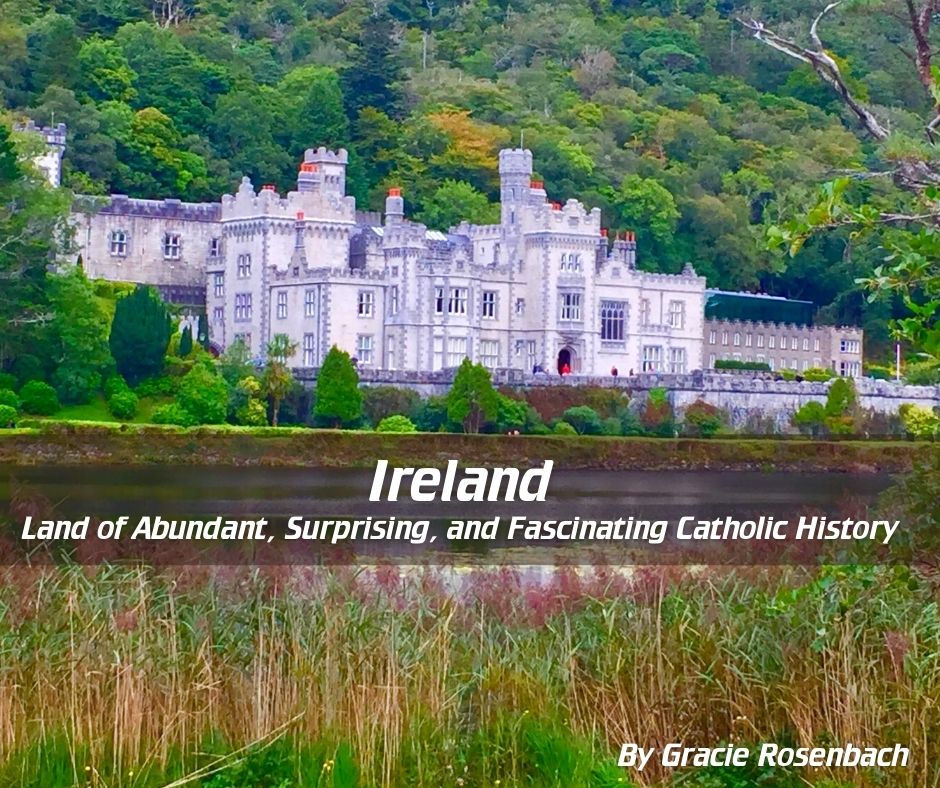 A Marian apparition site, Benedictine monastery, and a JFK mosaic inside of a cathedral – what more could you ask for out of a trip? We were able to see all of these and more on our mother-daughter trip to Ireland two years ago. Our 10-day trip took us around the country, from Dublin to Galway and everywhere in-between. We visited the beautiful landscapes of Connemara, prayed at the Knock Shrine, and learned some history in the Burren.

I knew our trip would be filled with amazing Catholic sites, prayers, and history, but we ended up stumbling upon and discovering even more than I had anticipated. As one of the countries with the largest shares of Catholics in the world (78%), it shouldn’t have been so surprising that there was Catholic history and culture at every turn. From St. Mary’s Cathedral in Dublin to the monastic settlement at Glendalough, and from Holy Cross, Holy Trinity, and Kylemore Abbeys to the Marian apparition site at Knock, it was amazing to see our faith well-represented throughout the country. And not only was the faith represented by a variety of sites (holy mountains, churches, monastic ruins), but also by a variety of people (the rural villagers who saw the apparition, numerous religious orders of priests and nuns, and even an American president on display in a cathedral) – the universality of our Church is truly on full display in Ireland. 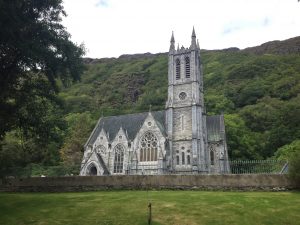 Our first exciting surprise was Kylemore Abbey –I thought it would just be a beautiful historic building with expansive, colorful gardens. I clearly hadn’t done any research on this site prior to visiting, but once we arrived I learned that it used to be a Benedictine monastery! It was great reading about the community of Benedictine nuns who have resided there since 1920, and until 2010 ran a boarding and day school for girls on the grounds. The gardens are truly spectacular, and are complemented by this beautiful quote that’s displayed nearby from Dorothy Gurney, “One is nearer to God’s heart in a garden than anywhere else on earth”. There’s also a beautiful Gothic church on the grounds, which just happened to have a violinist playing when we visited – the perfect atmosphere to pray and appreciate the beauty all around us. 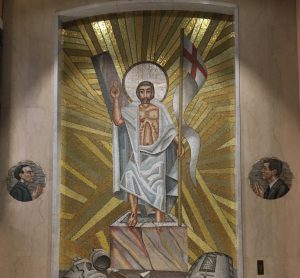 Perhaps the most surprising “Catholic find” of the trip was the JFK mosaic in Galway Cathedral. In one of his last international trips, before he was assassinated, the first Catholic president traveled to Ireland and visited the then-construction of the Galway Cathedral. The visit was very significant to the many Irish Catholics, and it helped to draw the needed monetary support from the United States to complete the cathedral. To honor his visit and his faith, the cathedral has a mosaic of him praying in one of the side chapels. It was a great reminder of the beautiful Catholic history shared between our two countries.

Another hidden gem we visited at the suggestion of a family friend who lives in the middle of the country was Clonmacnoise, a monastery founded in the 6th Century by St. Ciarán. Although the original structures are no longer fully intact, it’s still possible to walk around what remains of the buildings and appreciate all of the beautiful Celtic crosses throughout the grounds. The site also has three High Crosses, constructed in the 8th and 9th centuries, which have intricate carvings depicting important Bible passages. Clonmacnoise has a fascinating history, from plagues to Christian kings, to wars, so it’s amazing that it survived that all (to an extent). These monastery ruins were visited by Saint Pope John Paul II on his visit to the country in 1979, and they were a great addition to our trip. 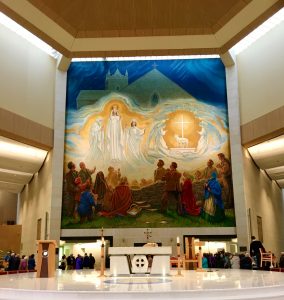 Finally, we visited the Knock Shrine. We were fortunate to go soon after Pope Francis’ visit during the World Meeting of the Families, and so we could see the thoughtful items he gifted to the Marian apparition site. Most notably, we saw the Papal Chair from his visit and the rosary beads that he gifted the shrine which are on display next to the Golden Rose that was gifted by Saint Pope John Paul II during his visit in 1979. What amazing Catholic history all in one place! The Shrine consists of five churches and a very interesting museum that provides all of the details of the apparition. The Basilica of Our Lady, Queen of Ireland is the most visually impressive building on the grounds and is what appears in most photos of the site. This stunning basilica provides space for the thousands of pilgrims each year to attend Mass at this sacred site, which we were fortunate to do during our visit. The mosaic depicting the apparition scene that hangs above the altar in the basilica comprises 1.5 million pieces of tiles, the largest of its kind in Europe. The Apparition Chapel was perhaps the most notable site we visited, which still has the original gable from the apparition, preserved for people to pray near. This chapel also has a beautiful depiction of the apparition itself, in a simple yet stunning display near the altar. This serene place was the perfect place to end our day in prayer.

Unfortunately, there’s rarely enough time to see everything, and I was very disappointed that we did not make it to Croagh Patrick, which is considered the holiest mountain in Ireland. While its religious history dates back thousands of years BC, today it’s most known for its Catholic tradition of honoring St. Patrick, who tradition says prayed and fasted on the mountain for 40 days for Lent in 441 AD. There is a chapel at the top, built in 1905, to commemorate the chapel ruins which were found and estimated to have been from the 5th century. Each year thousands of pilgrims hike up the rocky path (sometimes barefoot) to the summit to visit the chapel and to see the amazing views over County Mayo. How amazing it would be to visit the mountain where the patron saint of Ireland chose to spend one of his Lenten seasons!

Although we went to Ireland excited about the beautiful landscapes and diving into our family history, we left with a deeper sense of our faith, a better understanding of the history of Catholicism in that part of Europe, and a desire to grow closer to Our Lady. Now that I have a better understanding of the endless possibilities to encounter our faith in Ireland, I can’t wait to return back to explore even more of the Catholic sites and to dive deeper into those I’ve already visited. I would highly recommend a trip to Ireland for all the faithful, as a great opportunity to be pleasantly surprised by how much it will expand and deepen your faith. Select International created an amazing 12-day tour to this beautiful country, which they ensure will fully encompass all of the rich Catholic history and culture that Ireland has to offer!