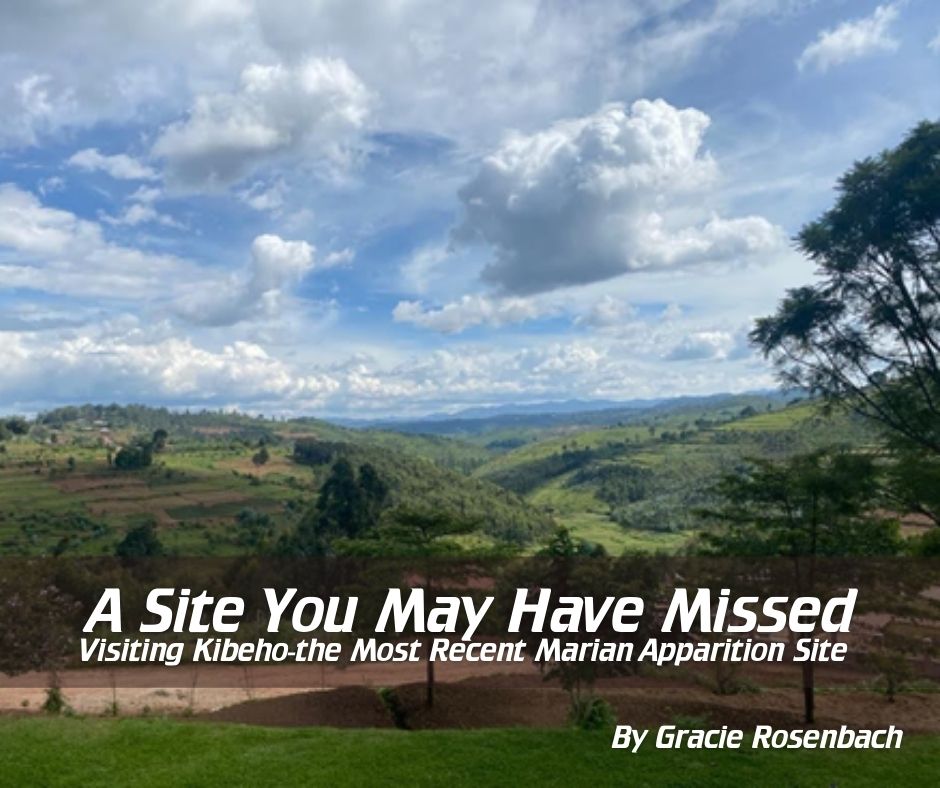 “I am a servant of the Servant of the Lord – please let me know if there’s anything I can do to make your visit more fruitful”. What a perfect welcome message from Father Francis as we arrived in Kibeho, the most recent Vatican-approved Marian apparition site.

Kibeho, Rwanda is a rural town in the Southern Province of the small East African country. It’s also the site of the modern-day, Vatican-approved Marian apparition site. From 1981 to 1989, Mary appeared in Kibeho to three schoolgirls numerous times, sharing 10 key messages with them, as shown in the picture below of the banner hanging on the church in Kibeho (there are 4 of these banners, one in each language of Rwanda – Kinyarwanda, Swahili, English, and French). She first appeared to Alphonsine, and her initial words introduced herself as Nyina wa Jambo, which is Kinyarwanda for “Mother of the Word”. This phrase – Mother of the Word – had never before been used in any Catholic traditions or texts, and as such was introduced to the world through this apparition. Our Lady also introduced the country to the Rosary of the Seven Sorrows – this rosary is originally attributed to the Servite Order from the 16th century, however, prior to the apparitions in Kibeho, had never been heard of in Rwanda. Marie Claire, another visionary, was appointed by Our Lady to ensure that the whole world hears about this important rosary. The other two visionaries were given directives as well – Alphonsine was to join a religious community, and Nathalie was to stay in Kibeho to pray for the conversion of the world and share her story of the miraculous apparitions with visitors and pilgrims. 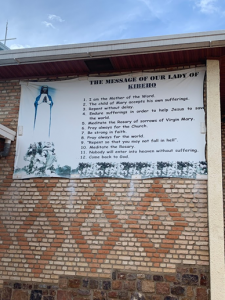 The 10 messages of Our Lady of Kibeho in English, hung on the Sanctuary outer wall

Since I live in Kigali, I have the privilege of being able to easily reach Kibeho – it’s just a 4-hour drive away (on mostly paved roads). When we arrived, we were immediately greeted by Father Francis, the Pallottine Father appointed by the local bishop to manage the apparition site. He showed us around the site, starting with the very first place of the apparitions and continuing with the small chapel which used to be the girls’ dormitory and the place where the Virgin Mary continued to appear. In later apparitions, Mary told the girls that she would appear next in the courtyard and so they built a platform for her apparitions and she began appearing there in August 1982. Since the apparitions happened in the modern-day, word spread about the three schoolgirls, and thousands of pilgrims from all over the world would gather in Kibeho to witness the girls as they saw Mary.

Father Francis, having lived in or near Kibeho for most of his life, was one of the people who witnessed the apparitions. When I asked about his most vivid memory of that time, he responded by telling us about the atmosphere surrounding the apparition on August 15, 1982. Mary had told the girls she would appear on that day with an important message. Since it was the Feast of the Assumption, the large crowd who had gathered was waiting in joyful anticipation, preparing for a big celebration of this special day. Instead, Mary appeared in tears and warned that if the world did not seek repentance and did not turn toward her Son and His love, that it would run the risk of falling into an abyss. Father Francis said that the mood immediately became somber, and left the thousands speechless. The visionaries were in tears as they heard this solemn warning. Of course, we now know that the Virgin Mary was in part foretelling the Genocide against the Tutsi which occurred in Rwanda in 1994, twelve years later.

Then Father Francis showed us a video that included footage of the apparitions, the medical and theological commissions established to decipher their validity, and interviews with the visionaries and others who were present. It’s hard to believe that there is video footage of the three girls seeing the Virgin Mary, but that’s exactly what we saw! During the apparitions, they appeared as in a trance, and the medical commission performed a series of tests – such as dripping hot wax onto them or poking them with a needle – to determine their physical and psychological state. Because of this wealth of evidence, the Vatican and the local bishop approved the apparitions on June 29, 2001. 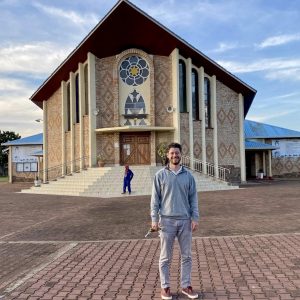 The exterior of the Kibeho Sanctuary

Because Kibeho is still a small, rural town and the apparition site remains modest, it’s not yet frequented by many pilgrims from beyond East Africa. For this reason, we were extremely lucky to have somewhat exclusive access. Upon exiting Father Francis’ office, we bumped into Nathalie, the visionary who remains at Kibeho to welcome pilgrims. How amazing to be able to meet someone who the Virgin Mary has appeared to! Despite the language barrier, even just bumping elbows with her (we are still in COVID times!) brought a deep sense of peace and awe over me. We were then treated to a private, trilingual Mass led by Father Francis for the newly ordained local bishop. Of course, the trilingual aspect was purely for my benefit, being the only non-Rwandan, but what a gift it was to experience the Mass parts in French, readings in Kinyarwanda, and homily in English.

Finally, we ventured down the Way of the Rosary to the water Source of Mary. Traditionally Kibeho did not have many water sources, and people would have to travel far to fetch water. The visionaries had many conversations with Mary about the crucial life-giving aspects of water and how important it is both physically and spiritually. They continually asked Mary for additional water sources, specifically to create “a source of miraculous water at Kibeho which should continuously flow and benefit to all who should use it.” Mary eventually promised to fulfill this request but in her own time. It’s debated whether Mary miraculously made the spring, or whether it had always existed and was blessed by her, but now the Source of Mary is in a small valley down from the mountaintop where she appeared. This newly built spring was blessed and dedicated to Mary, Mother of the World, on August 14, 2011, during the Eucharistic celebration led by the Vicar General of the Diocese of Gikongoro. This water source is never ceasing and provides fully clean water which some say has healing properties. 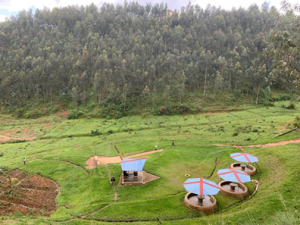 The valley where the Source of Mary is located

As a surprising bonus, we drove 2 kilometers away from the apparition site to the Cana Center – a Marian Formation Center of the Marian Fathers in Kibeho. This hidden gem has a huge outdoor amphitheater (well, at least it’s huge for rural Rwanda!) with a large statue of the Divine Mercy. And so of course they also have statues or paintings of Our Lady of Kibeho, St. Faustina, the Holy Spirit, and Saint Pope John Paul II. The center also features a beautiful trail of the Stations of the Cross and a Marian garden. It was actually this center where I stayed when I first visited Kibeho exactly four years ago! It’s such a beautiful and serene place to go to complement the Kibeho sanctuary with some reflections on the Divine Mercy and the Way of the Cross. 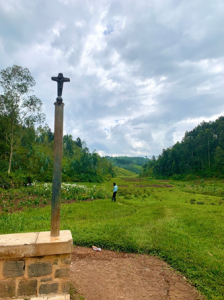 Views from the Source of Mary

Although more modest compared to the other Vatican-approved Marian apparition sites, Kibeho is an amazing pilgrimage destination. In fact, its relative exclusivity is a great reason to visit now, before it becomes more developed. Where else can you meet both a visionary and a witness to the apparitions, and not be bogged down by other pilgrims as you are asking them your questions? The calm of the rural countryside and the beauty of the Land of a Thousand Hills also provide an incredibly special backdrop in which to enjoy and contemplate these mysteries. And there’s no shortage of retreat centers run by various religious orders, full of priests and sisters who can’t wait to make your pilgrimage as fruitful as possible. After all, they are self-proclaimed ‘servants of the Servant of the Lord’. 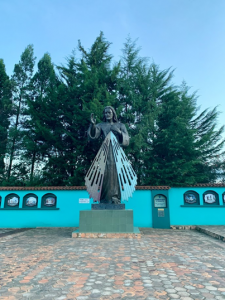 It’s such an amazing gift to be able to travel the world and see how God is working in every continent, sometimes in such miraculous ways as sending Our Lady to appear. I never cease to be amazed at the numerous beautiful pilgrimage sites all over the world – each one unique and offering something special to all who visit. Select International Tours is a great option to see the world while being sure not to miss any of these pilgrimage sites. Select has so many tours that they currently run, plus they are always looking to add new sites to their offerings. If you are interested in leading a group to a unique pilgrimage location, like Kibeho, give them a call! They are always excited to pioneer new trips – that’s why they were the first to introduce Pilgrimage Cruises, Faith and Food Pilgrimages, Faith and Fitness Pilgrimages, and dozens of other unique Catholic trips.