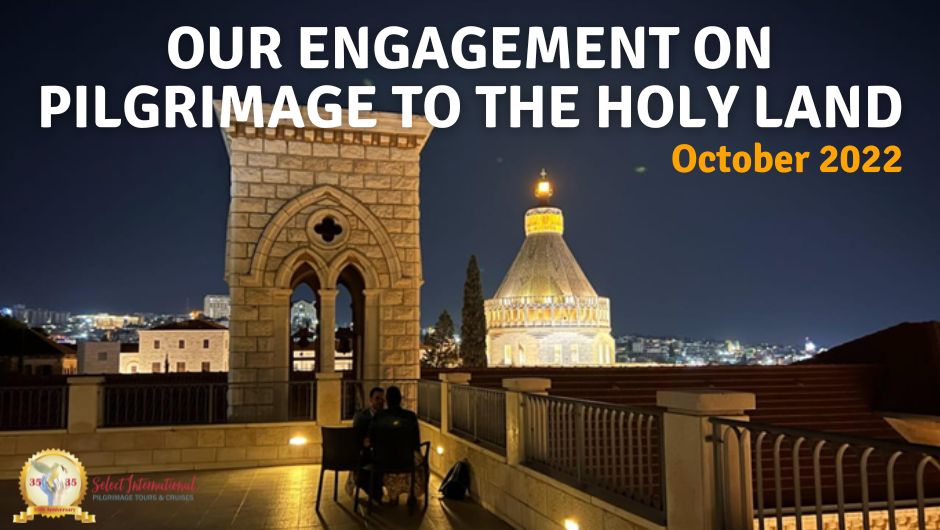 Can a pilgrimage be life-changing? It was for me! I have always wanted to travel to the Holy Land but never knew how it would be possible. When I finally had the opportunity to make a pilgrimage there this summer, I did not hesitate!

My hopes were high for this once—or hopefully more than once—in a lifetime opportunity to walk in the footsteps of Jesus. I felt full of excitement and anticipation as I packed my bags: clothes that protect from the sun, my laptop for journaling in the evenings, my water bottle, sunglasses…and an engagement ring.

Diana and I had been dating for about six months when we both decided to say yes to an opportunity to travel with a group on pilgrimage to Israel. Our faith is important to both of us, so we were eager to deepen our friendship with God and with each other as we traveled together on pilgrimage. We would not regret it!

As soon as I knew that Diana and I would be going to the Holy Land together, the inspiration came to me that I wanted to propose to her there. Nazareth, the village of Jesus’ childhood and the place where the angel of God appeared to Mary at the Annunciation, would be the perfect place. Nazareth is where God had asked Mary for her “Yes” through the Angel Gabriel, so I decided that Nazareth is where I wanted to ask Diana for her “Yes!”

I could not have imagined how well it would all work out, and I fully believe that God was at work to arrange things in a way that was beautiful beyond what I could have expected. After spending the first few days of our pilgrimage staying in Jerusalem and visiting such holy sites as nearby Bethlehem, the Mount of Olives, the Garden of Gethsemane, the Upper Room, and the Church of the Holy Sepulcher, we made our way north into Galilee, where (not thanks to my planning but by the Providence of God), our group had an overnight stay planned…where? In Nazareth!

Once in Nazareth, we visited the Basilica of the Annunciation, which contains the Grotto of the Annunciation, where the Angel appeared to Mary to ask for her “Yes” (in Latin, her “Fiat”) to becoming the Mother of the Son of God. Remember the engagement ring that I packed? It was my great-grandmother’s engagement ring that I had beautifully restored (with my mother&#39;s permission). As a personal addition to it, I had the word “Fiat” engraved on the inside of the ring in honor of Mary’s “Yes,” and in the hope of Diana’s “Yes!”

Once inside the Basilica of the Annunciation, we experienced one of the great blessings of making a pilgrimage—the opportunity to draw near to God in the sacraments. The priest of the Basilica was hearing confessions, and Diana and I both decided to receive the Sacrament of Reconciliation. What happened next was for me an unmistakable sign of God’s love and goodness and of his special presence with us on this pilgrimage.

I was the last in line for confession, and, as I was still waiting in line, the rest of the group went upstairs to visit the upper basilica. As I stood there, I prayed to God in my heart, “Lord, is this your will for me? Is this the night that I will propose to Diana?” After all, there I was in Nazareth with a ring and with Diana, who I felt more in love with each day. In the Basilica at that very time, there was an organist practicing his music for the upcoming Sunday’s liturgy. Amazingly, as I prayed my prayer, the organist abruptly stopped what he had been playing and began playing the Wedding March! (Dah DUM dah DUM…) Wow! I couldn’t believe it. He only played it for a short time before resuming the piece he was previously practicing, but the entire pilgrimage group upstairs noticed it and remarked on it later that day. Inspired by this sign from God, I made my confession, during which the priest gave me the advice, “This is the place where the Angel told Mary not to be afraid, so I say to you too, “Do not be afraid!” I walked out of the confessional feeling that God had given me the courage that I would need for later that night.

Our pilgrimage leaders had chosen an outstanding location for our lodging that night. It was in the guest house of a convent of French Sisters of the Annunciations. The guest house was on a small hill above the Basilica and had a rooftop terrace that overlooked the beautiful church. It was truly picturesque and, again, beyond what I could have imagined. That afternoon, Diana and I took leave of each other, during which time I went and bought a small icon depicting the Angel appearing to Mary at the Annunciation that I intended to give to Diana as an engagement gift in addition to the ring. Before we met up again to join our group for a family-style dinner in the convent dining area, I called Diana&#39;s mother who (somewhat miraculously given the time zone difference) answered the phone on her end in Portland, Oregon. I told her of my intention and asked for her blessing, which she granted me, and off I headed to dinner with the ring in my pocket…

After dinner, to my great relief, Diana suggested that we go up and see the view from the rooftop terrace. We pulled up two chairs to the end of the terrace to have the best view of the now-illuminated Basilica. We prayed a Rosary together as we often do, which in itself was very moving since we were in the very place where the Angel Gabriel first said the words, “Hail Mary, full of grace….” At the end of the Rosary, I got on one knee in front of Diana and proposed…and she said yes! I felt so relieved and full of joy, but I could never have guessed what would happen next.

A kind woman approached us. She had come up to the terrace with another group, but we had not noticed them. She said that when she saw that I was on my knee, she knew that I must be proposing, and she took a few pictures. She had come over to ask if we wanted her to send them to us, which of course, we did. Even though it sounds cliche, here I think the saying holds true that a picture is worth a thousand words.

A pilgrimage is far more than an ordinary trip or a vacation. It is a time set aside to allow God to work in our lives.

Each person’s life is unique, and each person’s pilgrimage will be unique. The details of my pilgrimage will differ from the details of yours, but what is certainly held in common is that God is at work in each of our lives in the way that we most need it, and there is perhaps no better way to express our openness to this work than by going on a pilgrimage. All it takes is our “Yes!”.

This was definitely true for me and my experience of pilgrimage to the Holy Land this Summer. I said “Yes” to a two-week journey to the Holy Land, and what I experienced was life-changing. Sometimes all it takes is a “Yes” for God to do amazing things for us.

Inspired by the Annunciation and by Mary’s “Yes” to God’s invitation, I wanted to ask Diana for her “Yes” in the same place where Mary pronounced hers. What followed was proof to me that God works in a special way in the lives of those who say yes to him and that a pilgrimage is a privileged opportunity for this. All of the details fell into place as if God himself had arranged them (and I believe that He did)

Of course, this is only one example of the many ways that God was at work during our pilgrimage. Each person we were traveling with has his or her own unique story of graces received and of lives transformed. What we all had in common, though, is that we said “Yes” when the opportunity to go on pilgrimage presented itself.

How is God at work in your life? Is he inviting you to encounter him on pilgrimage? How can you say “Yes” to God today? Is it through a pilgrimage with Select International Tours? If so, do not be afraid to give your “Yes”!

Are you ready to see what God has in store for you on a pilgrimage?

Yes! I Want to Visit the Holy Land! 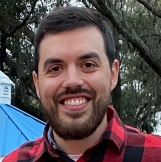 John Holloway is a convert to the Catholic faith and is currently pursuing his Master’s degree in Theology through the University of Notre Dame’s Echo program.